Rebekah Higgitt says.....
Don't worry - Christie will be back tomorrow! In the meantime, since London has recently experienced its largest snowfall in 18 years and some fairly low temperatures, I have had a quick look at the report from the Observatory's Magnetic and Meteorological Department for 1894. 5 January 1894, when Turner reported snow and low temperatures in his Journal, was the coldest day in the year from May 1893-May 1894 and temperatures plunged to 12.8° Fahrenheit (-10.67° Celsius) with the maximum that day only reaching 19° (-7.2° Celsius). This temperature was apparently “lower than any previously recorded since 1841, with two exceptions". I can only imagine how modern London's transport system would react!

This image was published in 1881 and shows some of the meteorological equipment used at the Observatory, including the self-registering equipment that was brought in by Christie's predecessor and former boss, George Airy. Some further information about this aspect of the Observatory's work can be found here. 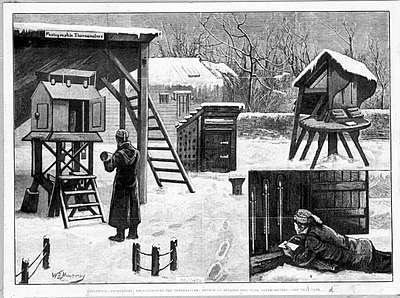 Lots of pictures of the Royal Observatory in the snow this week can be found on Flickr, including this set.