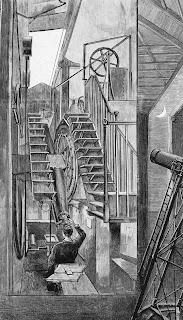 RH says.....
When there is little or nothing recorded in the Astronomer Royal's or Chief Assistant's journals we can assume that the regular work of the Observatory went on as usual. The annual publication of the Royal Observatory, Greenwich - Greenwich Observations - demonstrates how large a task regular observing and calculating work was, especially at a time that they felt themselves under-staffed. Christie boasted that despite expanding work in what were new fields for Greenwich - especially astro-photography, spectroscopy, double-star observation and increasing equatorial observations - they also managed to increase the number of regular transit observations.

Between May 1893 and May 1894 the average number of transits observed each day was 31 or, if Sunday was discounted, 36. However, conditions meant that this load was spread unequally and Christie noted that the "very favourable conditions" during February 1894 meant that on three consecutive days 458 transits and 460 zenith distances were observed. This was hard and repetitious manual labour for the observers, especially if we remember all the additional observations that had to be made in order to calculate the various errors that had to be factored into the equally labourious calculations that each set of data prompted.