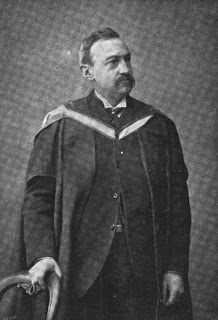 Sir Howard Grubb discussed with me plans for proposed 26in photo-equatorial (Sir. H. Thompson’s). He also examined with me the upper pivot of Great Equatorial which was fitted in some parts along line of bearing of friction rollers & concluded that it might be left alone for the present at any rate.

William Christie, Astronomer Royal
8
8
8
RH says..... Howard Grubb had taken over his father Thomas's Dublin-based Grubb Telescope Company (later Grubb, Parsons and Co.) on the latter's death in 1878. He was recognised as a world-class telescope-maker and designed Greenwich's 28-inch telescope and Astrographic Telescope as well as the telescopes donated by Henry Thompson, including the 26-inch that Christie had ordered on 14 February. The Great Equatorial was an older telescope, now in its fourth decade and relegated to the role of finder telescope. However, I think that Christie was here referring to the 28-inch: the Obervatory's new "great equatorial" and mounted, as it is today, in the Great Equatorial Building of the Royal Observatory.
Posted by Rebekah Higgitt