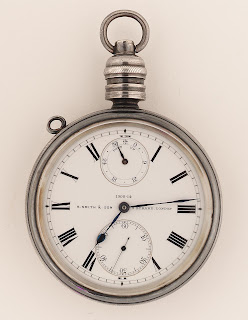 Two representatives from S. Smith & Sons called with reference to the supply of their non-magnetic watches for the Navy.

RH says..... Samuel Smith's jewellery and watch-making business was founded in 1851 and quickly became renowned for producing fine precision chronometers. For the Royal Observatory, the testing of chronometers and deck watches for the Navy took up an enormous amount of their time, energies and even on-site space. Christie's archives in Cambridge testify to this - there are at least 24 sets of papers and correspondence devoted to chronometer business.
*
The image accompanying this post is a pocket watch from about 1899 that was made by Emil Neilson[?] and supplied by S. Smith & Son. It is watertight but not, as far as I know, non-magnetic. This particular watch happens to have been used by one Robert Falcon Scott on his 1901-05 voyage on the Discovery and is currently on display in the National Maritime Museum's Oceans of Discovery gallery.
Posted by Rebekah Higgitt