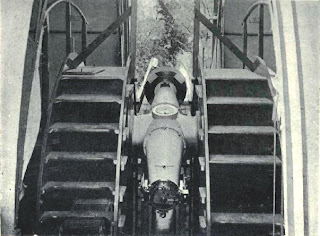 Went to Troughton & Simms in the afternoon & inspected Universal Transit Circle in progress.

RH says..... The Universal Transit Circle, being manufactured by the instrument makers Troughton & Simms, was Christie's new altazimuth instrument, which he described in an article here. It was to be housed in the Altazimuth Pavilion, designed by William Crisp and still being built at this time. A short history of Troughton & Simms can be see here. They had offices in Fleet Street in central London but, in order to see work in progress, Christie would have gone to their factory on Woolwich Road, Charlton, which borders Greenwich.
Posted by Rebekah Higgitt