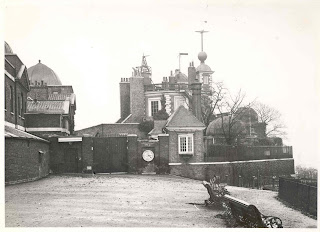 A Post Office Official (Mr Shaw) called & discussed arrangements for a Wall letter-box to be fixed at the Observatory with collections at 12. 3 & 5, and also for 9 & 11pm. if

RH says..... In this image, from about 1900, you can just make out the letter-box in the wall to the left hand side. In front of it, under the small protective shade, are the standard lengths available for the public to check their rulers and to the right of the gate is the 24-hour Shepherd Clock dial, displaying GMT to passers-by. The roof of Flamsteed House, Christie's residence, is bristling with meteorological equipment as well as the time ball, which is raised at 12.58 and drops at 1pm every day.
There is a gap in both journals for the next couple of days - and I am on leave from work - so I will meet you again on the 19th!
Posted by Rebekah Higgitt