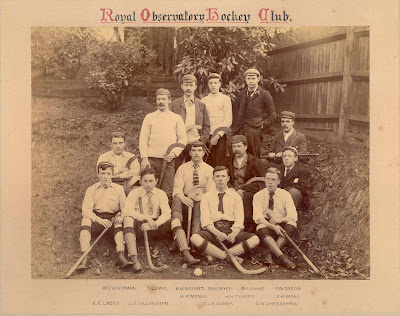 RH says..... The Royal Observatory Hockey Club was founded in Christie's time and, as this series of later photographs shows, existed at least into the 1930s. This photograph, which identifies the several members of staff on the team, is interesting for showing both H.H. Turner and Frank Dyson, the successive Chief Assistants. Both seem to have been keen players and Dyson's daughter wrote:

"[Dyson] became an enthusiastic member of the Observatory team, playing half-back where he acquired a name for speed. Most of the younger men on the staff played hockey, though the Club was not very vigorous till Dyson joined it and galvanised it into greater activity.... Sometimes there would be practice games with other local teams, such as the Blackheath Proprietary School. Largely owing to Dyson's energy and keenness, the Observatory team challenged the various hockey clubs of South London. It could hold its own against any of them."