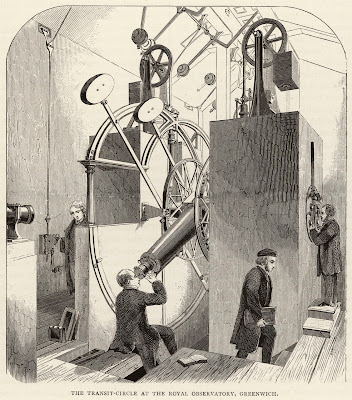 The frame of the Personal Equation Machine was sent to Troughton & Simms to be adapted to the new system of wires in the T.C.


RH says..... Christie described the Observatory's Personal Equation Machine in an article for the Monthly Notices of the Royal Astronomical Society in 1887, explaining that it was used with the Airy Transit Circle "with a view of determining absolute personal equations, the variations of personal equation depending upon the direction of movement, the velocity, and the magnitude of the star observed, and personality in observations of limbs of the Sun, Moon, or planets."
*
E. Walter Maunder in his 1900 book on the Observatory, explained how a transit measurement was made at Greenwich, with the "system of wires" Dyson refers to here.
"The watcher who wishes to observe the passing of a star must note two things: he must know in what direction to point his telescope, and at what time to look for the star. Then, about two minutes before the appointed time, he takes his place at the eyepiece. As he looks in he sees a number of vertical lines across his field of view. These are spider-threads placed in the focus of the eye-piece. Presently, as he looks, a bright point of silver light, often surrounded by little flashing, vibrating rays of colour, comes moving quickly, steadily onward -- 'swims into his ken,' as the poet has it. The watcher's hand seeks the side of the telescope till his finger finds a little button, over which it poises itself to strike. On comes the star, 'without haste, without rest,' till it reaches one of the gleaming threads. Tap! The watcher's finger falls sharply on the button. Some three or four seconds later and the star has reached another 'wire,' as the spider-threads are commonly called. Tap! Again the button is struck."
Posted by Rebekah Higgitt