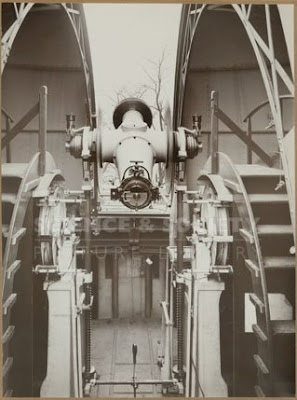 Went to Troughton & Simms in the afternoon about new Altazimuth (in progress), glass diaphragm with scales at right angles for measure of star photo’s, mounting of spectroscope on Great Equatorial &c. Mr Simms showed me an alloy of platinum (2 parts) & copper (1 part) recommended by Johnson & Matthey as uncorrodible, which he proposed to use for the circle of the new Altazimuth.

William Christie, Astronomer Royal
*
*
RH says..... Christie here refers to the Great Equatorial, which is the name normally associated with the 12.8-inch Merz, installed when George Airy was Astronomer Royal. The 28-inch had replaced this in the ROG's Great Equatorial Building, and Christie evidently transferred the name. Johnson and Matthey, a company that still exists, was a precious metals assayer that had produced the standard weights and measures for the International Metric Commission.

The 28-inch telescope had a half-prism spectroscope, designed by Christie himself, that had to be mounted underneath the telescope - a much larger instrument than the one that the building and mount had originally supported. According to the obituary of Christie by Turner, this half-prism design was pioneering, but the "soundness of its principles has since been questioned".