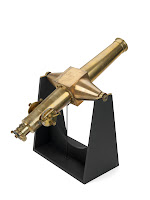 Took to pieces the level for portable transits which had been damaged by a fall at Cairo; & examined the lever applied by Mr Simms to the micrometer screw.The Astronomer Royal gave notice to 5 computers that they might work from 2-3 every day at the subjects proposed for the examination for 3rd Class Assistants; but that the proposal for such appointments had not yet been sanctioned by the Treasury.

H.H. Turner, Chief Assistant
Rebekah Higgitt says.....
Care and repair of the Observatory's instruments was an important part of the Chief Assistant's work. Here, Turner is referring to instruments used for the 1874 expedition to observe the transit (crossing) of Venus across the face of the sun. This rare event allows astronomers to make measurement to determine accurately the distance of the sun from the earth. The last transit was in 2004 and the next will be in 2012. After that we will have to wait until 2117. This instrument was one of five identical portable transit telescopes used at five observing stations in 1874, which are now at the National Maritime Museum. The record for another of these five instruments is online here.
Turner also refers to matters of staff education and promotion through an examination similar to those available to other Civil Servants. Further information about Christie's plans for staff reform can be seen here.
Posted by Rebekah Higgitt