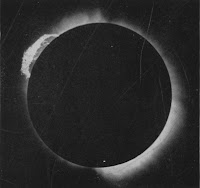 Saw Mr Awdry at the Admy.

Rebekah Higgitt says.....
Christie attended the same Royal Astronomical Society Council and Committee meetings as his Chief Assistant Turner (see previous post). The 'Eclipse Committee' was the Joint Permanent Eclipse Committee of the Royal Society and the Royal Astronomical Society, which was then planning an expedition to view the solar eclipse of 9 August 1896 in Japan. Christie and Turner were heavily involved with the planning and execution of this an several other eclipse expeditions.