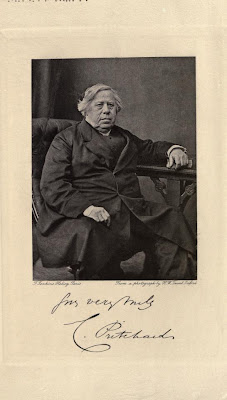 Miss Pritchard called with reference to a biography of Prof. Pritchard.

William Christie, Astronomer Royal
*
*
*
RH says..... William Prichard, the former Savilian Professor of Astronomy at Oxford, had died the previous year. Christie's previous Chief Assistant, H.H. Turner, had succeeded to the chair. Ada Pritchard, his daughter, published Charles Pritchard, D.D., Memoirs of his Life in 1897, which included an account of his theological worky, by the Bishop of Worcester and an account of his astronomical work by Turner. The book shows that Ada spent some time looking through the manuscript records of the Observatory, now held at Cambridge University Library.
Posted by Rebekah Higgitt