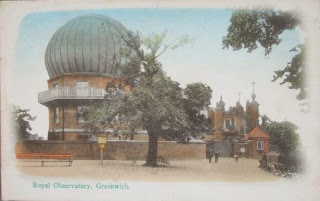 Mr Crisp & Mr Loughborough with Mr Awdry discussed the above. Also discussed, with Mr Crisp proposed Magnetic Pavilion in the Park and balcony below 36ft Dome.

RH says..... The 36-foot dome was the new onion-shaped dome that accommodated the larger 28-inch telescope instead of the Great Equatorial telescope that the building had originally contained. This postcard clearly shows the balcony that Christie discussed today.
* 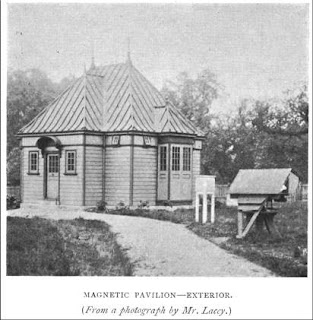 *
The Magnetic House at this time was still where it had been since the 1840s - in the south part of the Royal Observatory's site, but north of the New Physical Observatory. This area today is covered by the dome of the Peter Harrison Planetarium. Despite Christie performing apparently satisfactory experiments to test the effect of ironwork in the new buildings on the magnetic observations, it had obviously become clear that the would have to be performed away from the main site. The picture below shows the new Magnetic Pavilion, built in 1899, in the area of Greenwich Park that became known as the Christie Enclosure. This area, 350 yards east from the main site, once held several telescope domes, including that of the Yapp 36-inch telescope, as well as the Magnetic Pavilion and Magnetograph House. It was all dismantled and returned to the Park when the Observatory moved to Herstmonceux and the Greenwich site became part of the National Maritime Museum.
Posted by Rebekah Higgitt