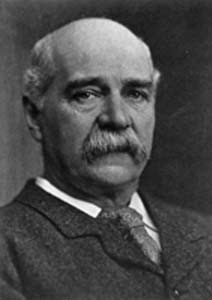 Saw Gen. Donnelly at S. & A. Department. Also Capt. Abney with reference to absorption of glass in ultraviolet part of spectrum. He advised use of Feils’ medium flint for photo. Spectroscope and large prisms adapted to a collimator of 2½ inches aperture.


William Christie, Astronomer Royal
*
*
RH says..... Sir John Fretchville Dykes Donnelly was, as this book suggests, "the very model of a modern Major-General", seeing active army service in the Crimea before focusing the rest of his career on scientific education within the Department of Science and Art at South Kensington. Through this he supervised science teaching not only in schools throughout the country, but also within many important higher education institutions. He had been educated at the Royal Military Academy at Woolwich, when Christie's father Samuel Hunter Christie was professor of mathematics.
*

The other meeting was with the equally wonderfully-named Sir William de Wiveleslie Abney (1843-1920), a chemist, astronomer and photographer who was a fellow and president of the Royal Astronomical Society. See his obituary here. He had first come to astronomy, at to Greenwich, through his involvement in supervising the photography associated with the 1874 transit of Venus expeditions.
Posted by Rebekah Higgitt