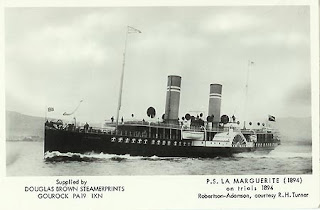 Went to Boulogne & back by sea from Tilbury in La Marguerite on the invitation of Sir W. Pearce.

RH says..... All this sounds like a jolly day out, though as the details appear in the journal it is probable that Christie was a guest in his official capacity. I presume that this is Sir William George Pearce (1861-1907), son of Sir William Pearce the Clydesdale shipbuilder. At this time, Pearce junior was MP for Plymouth and had just about run his father's company, the Fairfield Shipbuilding and Engineering Company, into the ground (he hired a general manager in 1894 who revived its fortunes). La Marguerite was a paddle steamer built and owned by this company, and was undergoing trials this year. It was one of three designed as excursion ships on the River Thames, and La Marguerite sailed to Margate and Boulogne for ten years.
Posted by Rebekah Higgitt