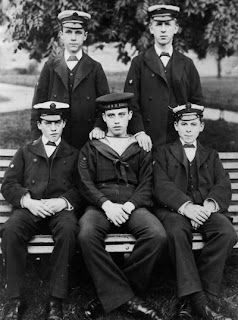 Went to distribution of Prizes at Greenwich Hospital School by the Prince of Wales at noon.

William Christie, Astronomer Royal
*
*
RH says.... Officially renamed the Royal Hospital School in 1892, this institution occupied the buildings that now house the National Maritime Museum. Originally an institution that provided for the children of the Naval pensioners at the neighbouring Royal Hospital for Seamen, from the 1840s to the 1930s it trained boys with a seafaring background for service in the Royal Navy. Its provision of scientific and mathematical training was particularly notable and there was an observatory in the school grounds. This, through the Royal Observatory, Greenwich, had been provided with instruments from the brief-lived St Helena Observatory (1828-1835). The Prince of Wales was Queen Victoria's son and the future Edward VII.
Posted by Rebekah Higgitt