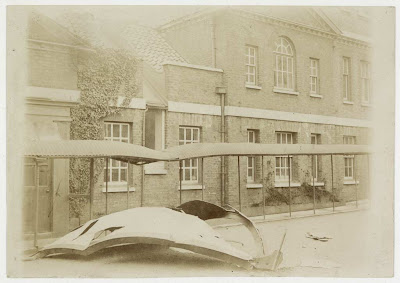 The shutter of the Astrographic Dome was blown off into the court at 11h 32m/ The wind was blowing 50 miles per hr, the pressure was 30 lbs per sq. ft. The head-piece of the dome fell inside, just missing Mr Davidson, who was printing reticles. The falling shutter struck the roof of the T.C. room breaking a few tiles and coping of the N.W. of the roof. It then fell on to the porch leading into the T.C. room, breaking one pane; it bent the corrugated iron covering in the front court & fell into the court. Niblett & Woodman at once covered the instrument with light tarpaulin, while Simmons procured some heavy tarpaulin from Messrs Mowlem & Co. Six of their men, who were engaged on the building of the New Altazimuth with Cross & Barnard firmly lashed this over the opening.
Frank Dyson, Chief Assistant
*
*
RH says..... Oh dear, disaster strikes again just as Christie has left for his holidays. What is great about this is that not only do we have a photograph recording the incident, but that Dyson tells us that the falling piece of shutter nearly hit Davidson, one of the Observatory's human computers. It's just as well that it missed as this is the very same Davidson who went on to become an Assistant and to head the famous eclipse expedition to Sobral in 1919 at the same time as Arthur Eddington was in Principe, in an attempt to provide observational proof of Einstein's theory of relativity. Eddington, who had been a vocal supporter of Einstein, and Dyson, who had suggested the idea and organised the whole, generally get the credit for this work, but it was the photographs taken in Sobral under Davidson that provided the usable data. Davidson, Eddington and Dyson were co-authors of the 1920 paper on their results.
Posted by Rebekah Higgitt