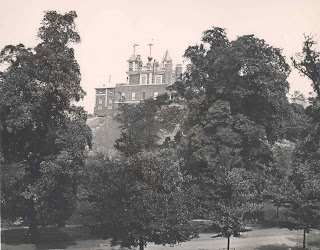 Col. Wheatley (Bailiff of Parks) called with Mr Jordan (Supert Greenwich Park) with reference to improvement of west boundary of Obsy from point of view of Park. He proposed to access[?] portion of garden between existing fence & west wall of Lawn & west side of garden house. I told him that questions of modification of boundary should be considered as a whole & explained to him the modification I should propose round Physical Obsy and on east side. It was understood that he would raise the question of the alteration of west fence.

Sir H. Thompson dined with me at R.S. anniversary dinner.

*
Dr Dyson made an observation of the Sun’s Transit across two plumb lines to determine the Meridian line of the New Altazimuth. The result agreed closely with the line obtained by Mr Nash by Magnetic Observations. The two plumb lines were 37ft apart. The Centre of the Sun & the second limb crossed the line 5s too soon: giving an error of 2s. Mr Nash’s line was compared with Col: Tupman’s & agreed well.

RH says..... Christie's plans for the Physical Observatory had always required that a small parcel of land from the Royal Park be brought within the Royal Observatory's boundary. His tagging of this issue onto the question of improving the western boundary around Flamsteed House is decidedly sneaky.
30 November, St Andrew's Day, is the anniversary of the Royal Society's foundation in 1660: 2010 (or technically 1 December 2009 to 30 November 2010) will be a celebration of the Society's 350th anniversary.
*
Lieutenant Colonel Tupman, mentioned by Dyson, had had a connection with the Royal Observatory in 1874, having organised one of the transit of Venus observing expeditions, but archives from the Observatory in Cambridge show that he continued observing at Hillfoot Observatory in Harrow.