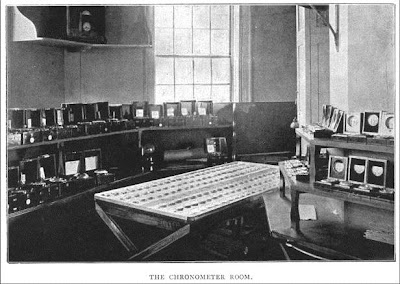 RH says..... As described in an earlier post, the testing of chronometers took up a great deal of staff time. It was work done directly for the Royal Navy which, since the Observatory was also run by the Admiralty, they were not in a position to refuse - although they did use it as a bargaining point. This illustration shows the Observatory's Chronometer Room, where the rate of the instruments was checked - i.e. their regular running, whether fast or slow. Another room included an oven in order to check their performance under hot conditions. This room, in the Great Equatorial Building that houses the 28-inch telescope, is now the office of the National Maritime Museum's Curator of Horology.
*
Captain Tizard, mentioned in this entry, was Assistant Hydrographer of the Navy and had been made a Fellow of the Royal Society on the strength of his work and publications on hydrographic surveying. Most importantly he had commanded HMS Challenger during its important scientific expedition of 1872-76 and, over the next three years, had written the narrative of the voyage. The NMM's archive holds some lovely sketches by Tizard of his shipmates aboard Challenger.
Posted by Rebekah Higgitt