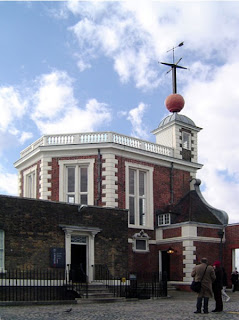 RH says..... The Royal Observatory's time ball was installed in 1833 in order to give a visual time signal to ships on the Thames. This allowed them to check the chronometers they used - along with the astronomical lunar distance method - to find their longitude at see. The mechanism still works: the ball rising half-way up the pole at 12.55, to the top at 12.58 and dropping at 1pm. With the arrival of telegraphic time signals from Greenwich in the mid 19th century, other time balls were set up at various ports, including Deal, Southampton, Chatham and Falmouth. The archives in Cambridge show that these prompted much correspondence for Christie.
Posted by Rebekah Higgitt