Photographs taken by Mr Maunder with the 28in Equatorial on Apr 21 shewing that an eccentricity of the image is produced by a tilt[?] of the crown-lens: it was readjusted by Mr Niblett

RH says..... Maunder is best known for his solar photography, but this is a reminder that, as head of the Photographic and Spectroscopic Department, his responsibilities extended elsewhere. G.E. Niblett, the Observatory's mechanic, was evidently an indispensible member of staff. Elsewhere Maunder wrote that Niblett's "skill is in constant requisition in devising, repairing, or keeping in order the many mechanical arrangements upon which so much depends". He was also in charge of the Observatory's electric lighting. The image shows his workshop in the New Physical Observatory, although this building was still incomplete as of 1894.
*
* 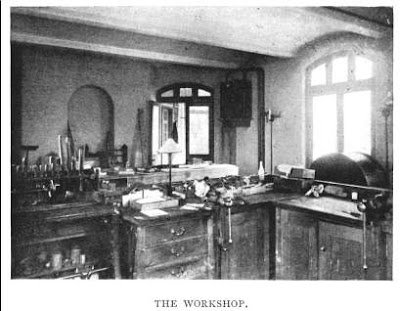