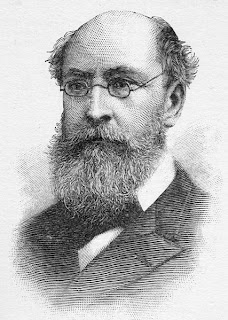 Frank Dyson, Chief Assistant
*
*
Benjamin Apthorp Gould was an American astronomer who had been in charge of the longitude department of the United States Coast Survey before becoming director of first the Dudley Observatory in Albany, NY, and then the Argentine National Observatory until 1885. At this date he was living in Cambridge, Massachusetts.
Posted by Rebekah Higgitt